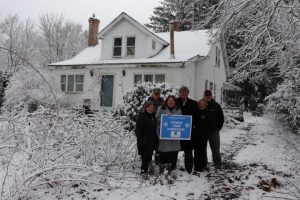 Your year-end contribution to Habitat for Humanity of Greater Plymouth will be doubled due to a challenge grant to the organization from the A.D. Makepeace Company.

HfH is raising funds to rehabilitate this home in Carver for use by a deserving income-eligible family.

“Habitat does such a wonderful job supporting those in need in our communities, and we are pleased to see that military veterans will get preference for this home,” said James F. Kane, president and chief executive officer of the A.D. Makepeace Company. “We’re happy to be able to help financially, and we are hopeful that members of our staff can assist with the construction as well.”

Organizers want to make sure it’s clear that this is a “before” photo. Habitat will bring the home and its spacious yard to full code compliance, and a beautiful spot to raise a family.

Read more about the project here.

And donate to the challenge by clicking here. 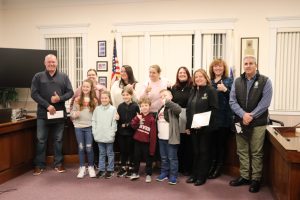 CARVER – Members of the school community recognized the A.D. Makepeace Company and its Read Custom Soils division Monday for contributing special engineered soil valued at more than $50,000 for walking trails around the new Carver Elementary School.

The remarks were made to the School Committee by five very articulate students at Carver Elementary: first graders William Caron, Nolan Farquharson, and Ellie Beaulieu, Hazel Butterworth, Nia Blackwell, who are in the fourth grade.

The students shared their enthusiasm for the new walking/running path and shared their love for running including time with family, following their passions, and gaining a sense of achievement.  The three girls in 4th grade participated in the Thanksgiving race in Plymouth and took three of the top four spots for their age group.  Will and Nolan said the path was also good for bike riding and how it was fun to race and beat their parents.

The path winds nearly half a mile around fields that are used by town soccer for youth games and practices, said School Superintendent Scott Knief.  During the school day, physical education classes will use the path. It will also be used by the Elementary School’s walking/running club, with about 100 students participating, that meets before school two days a week in the fall and spring, and the space is open to the community after the school day is over.

During a brief slide presentation, Superintendent Knief said the walking/running trail was “value engineered” out of the school building plans as a cost savings measure, and the estimate for construction was more than $90,000.

According to Chris Ierardi, ADM vice president and general manager of the Read division, the company brought in just under 400 tons of stabilized stone dust to create a surface that is ADA compliant and easy to maintain.