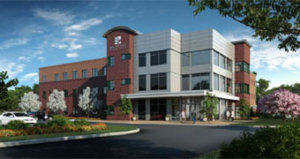 WAREHAM, MA – The A.D. Makepeace Company has announced plans to install a series of solar power canopies above the parking lots at 100 Rosebrook Way.

Working in conjunction with Renewable Energy Development Partners, LLC, of Hingham, ADM will install nine to 12 canopies which will provide protection for parking lot users and generate more than 800 kilowatts of electricity.

The building is leased to Southcoast Health and Fresenius Medical. Hundreds of visitors use the medical services there daily.

“This is yet another example of our commitment to renewable energy, and we are confident it won’t be the last such installation,” said James F. Kane, president and chief executive officer of the A.D. Makepeace Company. “We see this project as a model in support of the Commonwealth’s climate change objectives, and as a farmer, we have a vested interest in protecting against climate change impacts.”

Rosebrook is already home to Wareham’s first large scale ground-mounted solar installation, a 0.5 megawatt facility which has been generating power since 2015. The company has 15 ground-mounted solar installations and three more under construction, generating a total of 122 megawatts of power. The company also uses solar panels to power irrigation pumps in cranberry bogs on its properties throughout Wareham, Carver, and Plymouth.

Southcoast Health is committed to clean energy as well, having pledged to cut emissions by 50 percent over 2008 levels by 2030.

“All of us at Southcoast Health understand that the health of our people is tied intrinsically to the health of our planet,” said Dr. Ray Kruger, president and chief executive officer of Southcoast Health. “The consequences of climate change are among the many factors that can diminish wellbeing and life expectancy. Southcoast, alongside strong partners like the A.D. Makepeace Company, continues to prioritize sustainability as a guiding goal in the projects our community health system undertakes.”

Each solar-generating canopy in the parking lot will be comprised of a number of 450-watt photovoltaic modules with a 7-degree tilt angle. They will shield cars in the lot from sun and precipitation.

The installation requires approval of the Wareham Planning Board. Final plans are being designed, and the company hopes construction can begin this fall.

In addition to the greenhouse gas reduction resulting from clean energy development, solar energy is an important element of the economic development landscape in Massachusetts. According to a recent report by the Interstate Renewable Energy Council, Massachusetts ranks third among states in the U.S. in solar-related jobs, and employment increased by 11 percent in 2021.